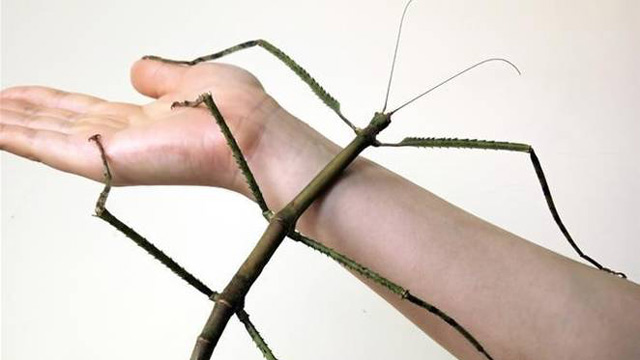 While to some the idea of a two-foot long bug may be the perfect fuel for a total freak-out, no one can deny that the latest superlative insect discovered in China is nothing less than majestic! It is a remarkable stick insect measuring in at 62.4 centimeters – a 24.6-inch bug that looks like a twig, if not a branch. Nature never ever fails to impress.

Alerted by locals of the mighty many-legged creature, scientist Zhao Li had been on the hunt for the bug for six years before he finally found one, reports the official state China Xinhua News.

“I was collecting insects on a 1,200-meter-tall (3,397-foot) mountain in Guangxi’s Liuzhou City on the night of Aug. 16, 2014, when a dark shadow appeared in the distance, which looked like a tree twig,” says Zhao. “As I went near, I was shocked to find the huge insect’s legs were as long as its body,” he added.