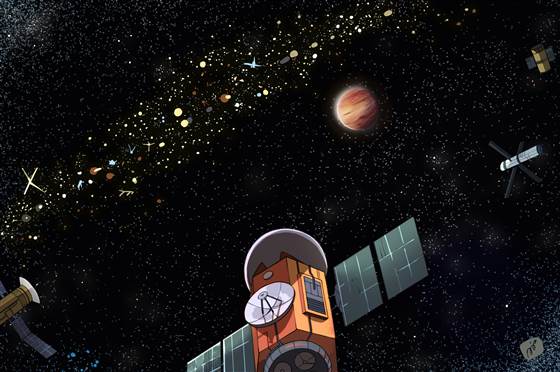 It’s another scheme for finding the Romulans or the Borg — and it definitely has some advantages.

The usual approach to looking for alien societies is to scan the skies for signals like radio transmissions or bright, flashing lasers. Either would tell us that someone’s out there.

Lamentably, these schemes have a troublesome drawback: the need for synchronicity between the sender (aliens) and the receiver (us). What are the chances that, when our attention is directed to a particular planetary system, their transmitters are aimed our way? It’s like two pairs of eyes meeting across a crowded casino. It might not happen.

That’s why a detection scheme that doesn’t depend on synchronicity — like the one proposed in a new paper published in The Astrophysical Journal — has such great appeal. The idea is to hunt for evidence that’s always around — artifacts that might even outlast the extraterrestrials themselves, in the same way that fossilized bones reveal the long-gone dinosaurs. We’ve never seen a T. rex, nor heard its roar. But we have no doubt that they once stomped across the landscape.