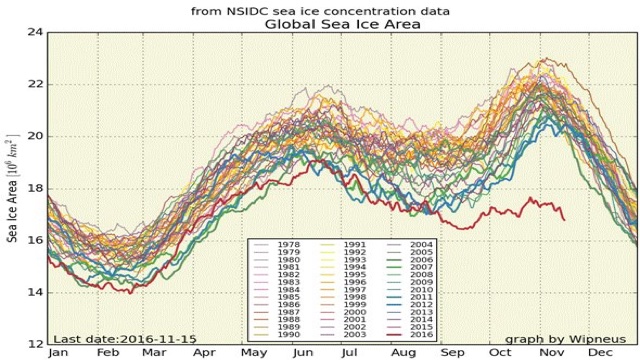 I’ve written quite a bit over the past few years about the death spiral of sea ice at the North Pole. Every year the amount of ice goes up and down with the seasons, growing in winter and declining in summer. But, on top of that there has been a trend downward, such that year by year we see less ice all the time.

Because of that we tend to see records set nearly every year. For example, this year in March the Arctic sea ice reached its maximum extent,* but it was the lowest maximum extent ever seen since satellite records began in 1979.

Starting in September every year the ice begins to reform, growing to a maximum. It reached that point on Sept. 10 this year, when it had the second lowest extent on record. After that day, though, it started to grow again.

Except … it didn’t . It started to, but then in early October the growth just stopped. A couple of weeks later it started to rise again, but stalled a second time in late October. In the weeks since then the amount of ice has actually fallen a bit. We are now at record low ice for this time of year, and have been for weeks.