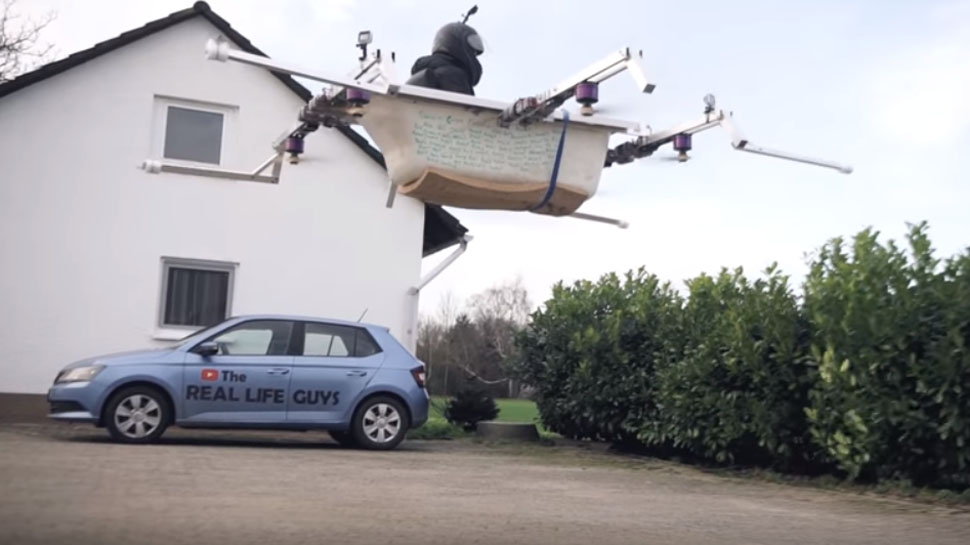 Although flying cars remain elusive, aviation technology has come a long way since Orville and Wilbur Wright built the world’s first successful airplane over a century ago. But even the Wright brothers can’t claim to be the first men to make a bathtub fly. That questionable honor belongs to the crew behind the YouTube channel, The Real Life Guys, who created a working drone from a bathtub. It’s an absolutely ridiculous idea, but making bathtubs into vehicles is a recurring theme for the team. The following video exaggerates the reach of the bathtub drone by giving it a pilot who uses it to drop by his favorite bakery for a quick snack.

We first came across this video at Laughing Squid, and it’s an absolute delight. When it’s flying in the air, it almost looks like it escaped from a ’70s Disney movie or possibly an animated film by Studio Ghibli. But it is oddly beautiful, in its own weird way.

As much as we want to believe a tub can fly, and that there’s a battery capable of sustaining a pilot’s flight for that duration and distance, we’re sad to say this video isn’t meant to be taken seriously. The German language disclaimer at the end of the video states it’s a comedic sketch and implies the pilot seen in some of the video’s shots may have been a dummy used to sell the effect. While the flying bathtub drone itself appears to be real, it’s just not as powerful as the first video made it out to be.