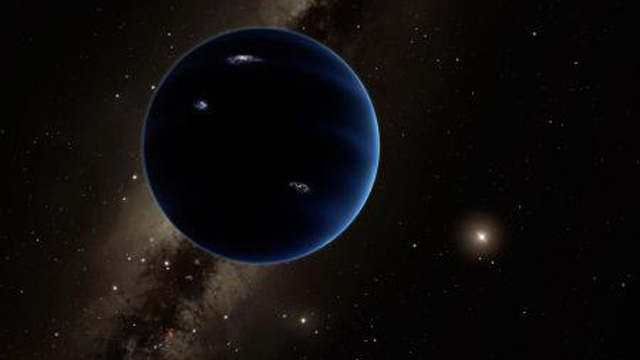 Caltech researchers have found evidence of a giant planet tracing a bizarre, highly elongated orbit in the outer solar system. The object, which the researchers have nicknamed Planet Nine, has a mass about 10 times that of Earth and orbits about 20 times farther from the sun on average than does Neptune (which orbits the sun at an average distance of 2.8 billion miles). In fact, it would take this new planet between 10,000 and 20,000 years to make just one full orbit around the sun.

The researchers, Konstantin Batygin and Mike Brown, discovered the planet’s existence through mathematical modeling and computer simulations but have not yet observed the object directly.

“This would be a real ninth planet,” says Brown, the Richard and Barbara Rosenberg Professor of Planetary Astronomy. “There have only been two true planets discovered since ancient times, and this would be a third. It’s a pretty substantial chunk of our solar system that’s still out there to be found, which is pretty exciting.”

Brown notes that the putative ninth planet—at 5,000 times the mass of Pluto—is sufficiently large that there should be no debate about whether it is a true planet. Unlike the class of smaller objects now known as dwarf planets, Planet Nine gravitationally dominates its neighborhood of the solar system. In fact, it dominates a region larger than any of the other known planets—a fact that Brown says makes it “the most planet-y of the planets in the whole solar system.”