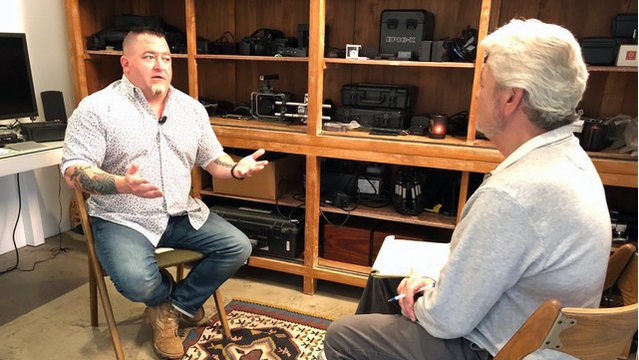 “If this was a court of law, we are beyond reasonable doubt.” Those were the words of Luis Elizondo in a recent interview by I-Team Las Vegas and George Knapp (as seen in the picture). Last October, Elizondo ended his long career with the U.S. government, and with one of his most recent positions being the director of the Pentagon’s study of unknown aerial objects (ATTIP), he definately knows a thing or two about the subject. The program was authorized by Harry Reid, a former U.S. Senator in conjunction with Bigelow Aerospace.

Not long ago, the founder of Bigelow aerospace told the public (in a 60 minutes interview) that we are not alone, and that Earth is currently being visited by extraterrestrials. Elizondo also shared his belief that there is a lot of evidence showing that we’re “probably not alone, whatever that means.”

Elizondo is part of the To The Stars Academy, headed up by Tom Delonge, the company that the US Government is working with to disclose the existence of UFOs to the American public, as well as the exotic technologies that go with them. They are the ones the Pentagon went through to spread the release of their UFO footage.

The company’s team also has Hal Puthoff, a co-founder of the US Government’s STARGATE project, a 25 year program that investigated parapsychological phenomena.

When Elizondo made the court of law statement, he was referring to the scientific data, and more, we now have showing that something strange has been going on in our atmosphere for a very long time. He’s also gone on the record stating that,

For the first time, we have a compelling picture that what we are seeing is explained in our current understanding of physics, advanced physics, and quantum mechanics…perhaps all these observables that we have been seeing, for example: sudden and extreme acceleration, hypersonic velocities, low observability, trans-medium travel and last but not least positive lift, or anti-gravity, is really a manifestation of a single technology. So it’s not five exotic technologies we’re trying to figure out how it works. It’s one and we think we know that one too.