Many science-savvy people take it for granted that the universe is made not only of Carl Sagan’s oft-quoted “billions and billions” of galaxies, but also a vast amount of an invisible substance called dark matter. This odd matter is thought to be a new kind of subatomic particle that doesn’t interact via electromagnetism, nor the strong and weak nuclear forces. Dark matter is also supposed to be five times more prevalent in the universe than the ordinary matter of atoms.

A recent calculation has changed that. The calculation helps resolve the conundrum of the Tully-Fisher relation, which compares the visible, or ordinary, matter of a galaxy to its rotational velocity. In very simplified terms, scientists have found that the more massive (and therefore brighter) a spiral galaxy is, the faster it spins.

But if dark matter exists, how “big” a galaxy is should be determined not just by its visible matter, but also by its dark matter. With a huge piece of the equation — the amount of dark matter — missing, the Tully-Fisher relation shouldn’t hold. And yet it does. It was hard to imagine any way to reconcile this relationship with existing dark matter theory. Until now. 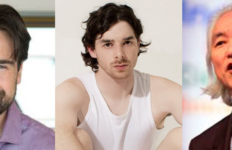 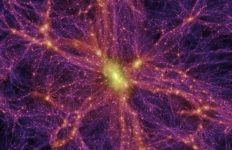 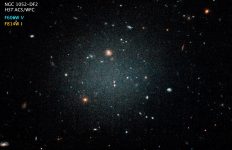 Defying Theories, This Ghostly Galaxy Has Almost No Dark Matter→