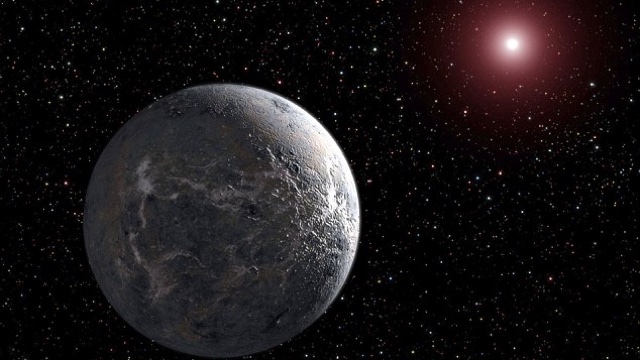 Super-Earth K2-3d sits just 150 million light years away from Earth, and is one of the most likely planets we know of to host alien life.

The large planet seems to have all of the right ingredients for aliens to thrive: a bright nearby star, the perfect conditions for hosting liquid water, and a warm, Earth-like climate.

Now, the mysterious planet’s upcoming eclipse of the red dwarf star it orbits could finally reveal whether or not K2-3d is hiding extraterrestrial lifeforms.

K2-3d has a warm, Earth-like climate. It’s possible that liquid water could exist on the surface of the planet, heightening the potential for alien life. Pictured is an artist’s impression of a super-Earth like K2-3d orbiting its host star

Nasa’s enormous Hubble telescope will spend about five days over the next year carefully investigating K2-3d.

The hope is that they find a hydrogen-rich atmosphere, or a blanket of clouds, says Dr Björn Benneke at the California Institute of Technology.

Both would be signs of planetary life.

If observations reveal the molecular signature of water, methane or ammonia in K2-3d’s atmosphere, it would mean we have a real chance to look for extraterrestrial life.

‘If we found any signal, then we would hit K2-3d extremely hard with James Webb Space Telescope [Nasa’s successor to the Hubble telescope, which will launch in 2018],’ Dr Benneke told New Scientist.

‘There’s no doubt about that.’

K2-3d is an extrasolar planet, meaning it lies outside of our solar system.