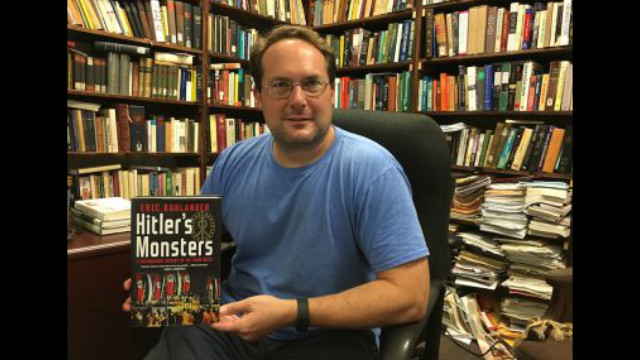 Dr. Eric Kurlander will discuss the significant links between Nazism and the supernatural including; occultism, mysticism, flying saucers, werewolves, and so much more!

Eric Kurlander, Ph.D., is a professor of modern European history at Stetson University. Kurlander earned his B.A. at Bowdoin College and his M.A. and Ph.D. at Harvard University, teaching three years at Harvard before coming to Stetson in 2001. He offers courses on Modern German, European and World History. His recent monograph, Hitler’s Monsters: A Supernatural History of the Third Reich, offers the first comprehensive study of the supernatural in Nazi Germany, illustrating how the Third Reich drew upon a wide variety of occult practices, esoteric sciences and pagan religious ideas to gain power, shape propaganda and policy, and pursue their dreams of racial utopia and empire. The book has been reviewed positively in the Washington Post, Times of London, Der Spiegel, the National Review, as well as other prominent periodicals in the United States, Canada, Great Britain, Germany, France, and Italy. The book has also been translated into Italian, Polish, and Croatian.