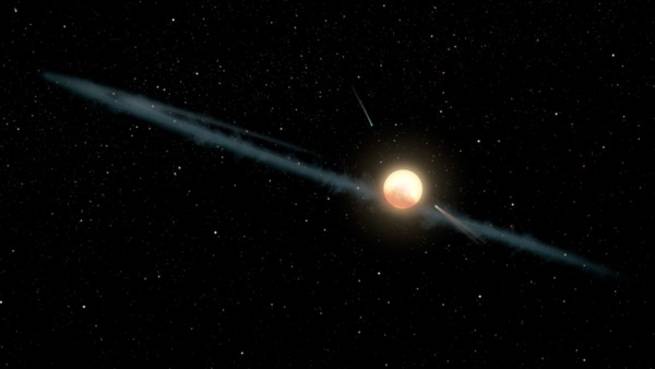 We’ll admit that space dust is slightly less cool than an alien civilization.

Three hundred and ninety parsecs away from Earth, a star dimmed in a weird way. Then it did it again. Astronomers wondered what the heck they were seeing, and speculation abounded, including the appealing possibility that it might be evidence of an alien megastructure.

But now a closer look, published in Astrophysical Journal Letters and authored by over 200 researchers, finds that the star’s dimming is more likely dust than anything else. Large, solid objects (like a hypothetical alien megastructure) would have appeared opaque to our ground-based telescopes. But instead some wavelengths of light were seen, consistent with dust.

“What is causing the shorter term punctuated dimming can’t be an opaque screen, it has to be something that changes the color of the system. It might be small particles of dust or effluent from disintegrating comets, but this really seems to rule out anything that is entirely opaque,” says Keivan Stassun, an astronomer who has studied the star before but was not involved in the new research.

If the things blocking out the star’s light were opaque, all wavelengths of light would dim at once. Instead, the strongest dips happen in the blue wavelength, which is more consistent with a screen of dust particles less than one micron across.

“This marks the first detection of the dips in brightness for this crazy star of ours—KIC 8462852—since the Kepler mission when the star was discovered,” says Tabetha Boyajian. “We monitored it here on the ground for a couple of years, and nothing happened. Then, in May of 2017 it started to dim again. This paper presents the first analysis of what happened.”