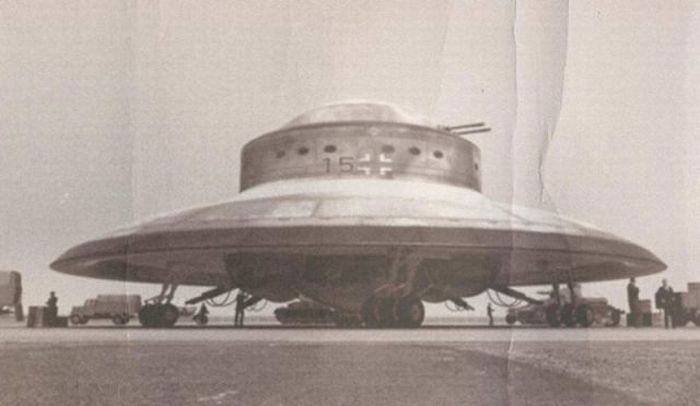 A German newspaper recently published an interview with George Klein, famous German engineer and aircraft expert, describing the experimental construction of ‘flying saucers’ carried out by him from 1941 to 1945.”

Exotic technology has been around for a long time, and so have the agencies within the Department of Defense that use it. Just imagine what type of technology the NSA — an intelligence agency whose existence was denied until the mid-1960s — was using in the 1950s. Then there’s the National Reconnaissance Office, which was founded in 1960 but remained completely secret for 30 years. Secret technologies have been wrapped up in the Black Budget and Special Access Programs (SAPs) for years, and many of these SAPS remain unacknowledged by anybody within the government. They’re exempt from standard reporting requirements to Congress.

“It is ironic that the U.S. would begin a devastating war, allegedly in search of weapons of mass destruction, when the most worrisome developments in this field are occurring in your own backyard. It is ironic that the U.S. should be fighting monstrously expensive wars in Iraq and Afghanistan, allegedly to bring democracy to those countries, when it itself can no longer claim to be called a democracy, when trillions, and I mean thousands of billions of dollars have been spent on projects about which both the Congress and the Commander in Chief have been kept deliberately in the dark.”

During World War Two, multiple strange sightings occurred, of disc-shaped objects travelling at incomprehensible speeds. When the Associated Press and New York Times covered the topic in 1945, they speculated the objects might be a new form of German weaponry.

There is no shortage of strange documents in the CIA’s Freedom of Information Act (FOIA) electronic reading room. Many reveal the agency’s efforts to keep tabs on the technological developments of other countries, especially during and after World War II.

One document brings up a famous German engineer named Georg Klein, who, as the document states, expressed that “though many people believe the ‘flying saucers’ to be a postwar development, they were actually in the planning stage in German aircraft factories as early as 1941.”

The document then goes on to mention an experiment described by Klein:

“The “flying saucer” reached an altitude of 12,400 meters within 3 minutes and a speed of 2,200 kilometers per hour. Klein emphasized that in accordance with German plans, the speed of these “saucers” would reach 4,000 kilometers per hour. One difficulty, according to Klein, was the problem of obtaining the materials to be used for the construction of the “saucers,” but even this had been solved by German engineers toward the end of 1945, and construction on the objects was scheduled to begin, Klein added.