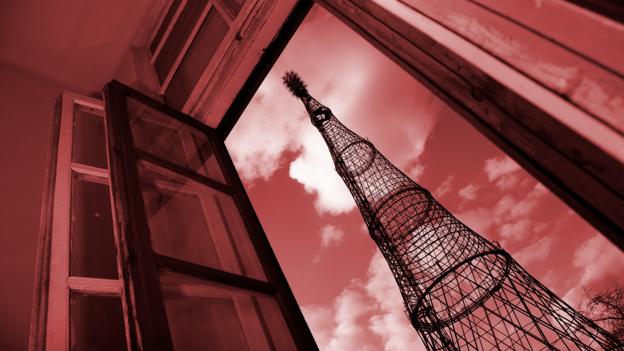 In the middle of a Russian swampland, not far from the city of St Petersburg, is a rectangular iron gate. Beyond its rusted bars is a collection of radio towers, abandoned buildings and power lines bordered by a dry-stone wall. This sinister location is the focus of a mystery which stretches back to the height of the Cold War.

It is thought to be the headquarters of a radio station, “MDZhB”, that no-one has ever claimed to run. Twenty-four hours a day, seven days a week, for the last three-and-a-half decades, it’s been broadcasting a dull, monotonous tone. Every few seconds it’s joined by a second sound, like some ghostly ship sounding its foghorn. Then the drone continues.

Once or twice a week, a man or woman will read out some words in Russian, such as “dinghy” or “farming specialist”. And that’s it. Anyone, anywhere in the world can listen in, simply by tuning a radio to the frequency 4625 kHz.

It’s so enigmatic, it’s as if it was designed with conspiracy theorists in mind. Today the station has an online following numbering in the tens of thousands, who know it affectionately as “the Buzzer”. It joins two similar mystery stations, “the Pip” and the “Squeaky Wheel”. As their fans readily admit themselves, they have absolutely no idea what they are listening to.

In fact, no-one does. “There’s absolutely no information in the signal,” says David Stupples, an expert in signals intelligence from City University, London.