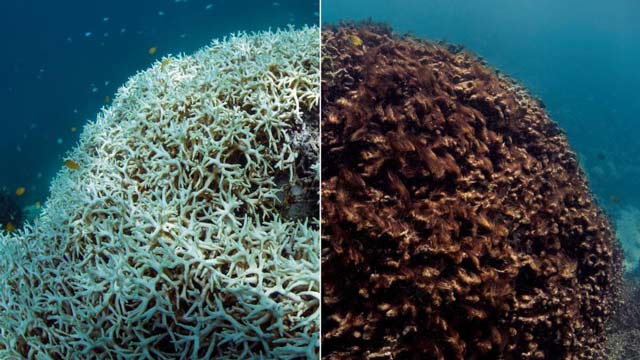 Depleting fish populations and corals that are still bleaching in the winter paint a bleak picture for parts of the Great Barrier Reef, which is undergoing a “complete ecosystem collapse,” scientists say.

For a week, Coral Watch chief investigator Justin Marshall surveyed the reefs around Lizard Island in Queensland, according to the Guardian. He said many of the fish species commonly spotted around the coral had completely disappeared.

“The lack of fish was the most shocking thing,” Marshall told the Guardian. “In broad terms, I was seeing a lot less than 50 percent of what was there [before the bleaching]. Some species I wasn’t seeing at all.”

Coral bleaching occurs when ocean waters warmed by climate change cause coral communities to release the algae that provided their color and food. The corals can’t cool down and find new algae fast enough, which causes them to die out and become a milky shade of white before they begin to decompose and attract turf algae.

A declining population of fish was a major indication that the ecosystem had collapsed. When corals die, they become covered with algae, which cuts fish off from the sources of shelter and food that they need, according to Coral Watch. Without these resources, the fish either die out or move elsewhere.

Another blow to the livelihood of the Great Barrier Reef: Marshall told The Guardian some of the corals continued to bleach, even as cooler water from the Southern Hemisphere’s winter moved in.

“There are still corals bleaching,” said the scientist. “Especially noticeable on Lizard Island were the soft corals. Some of them have remained bleached. And some of the hard corals are still white.”