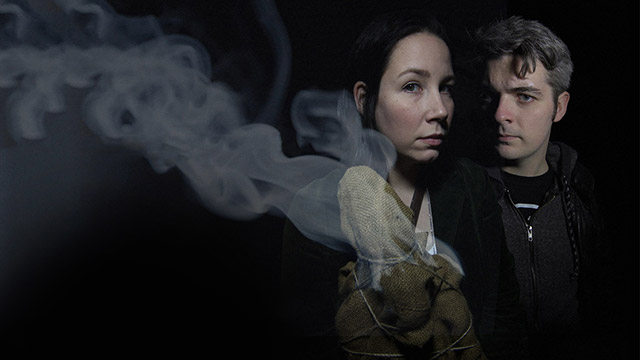 Greg Newkirk: is a paranormal investigator, occult museum director, and real-life monster hunter. In other words, he’s a professional weirdo. For the last two decades, Newkirk has been tracking down and investigating cases of the anomalous, the occult, and the just plain weird. In that time he’s tackled cases of encounters with mine-dwelling extraterrestrial goblins, witnessed the mysterious Brown Mountain Lights, drank questionable liquids with real vampires, and had books thrown at him by a poltergeist trapped in a cursed church.

When he’s not criss-crossing the country in search of monsters, mysteries, and magick, Greg can be found performing strange, often dangerous experiments in search of the truth. Whether he’s orchestrating successful alien abduction attempts, rappelling into sacred caves on spirit-quests, or summoning the spirits of the dead for a chat about the afterlife, Newkirk is regularly pushing the boundaries of paranormal investigation well beyond simply ghost hunting. As if Greg’s eerie adventures and odd experiments weren’t enough to qualify him as one today’s foremost authorities on the subject of the unexplained, he’s also the director of the world’s only Traveling Museum of the Paranormal and the Occult, a roving display filled with terrifying relics from real hauntings, occult crimes, and startling evidence collected during his nearly twenty years of anomalous research.

Dana Matthews: Dana Matthews is a supernatural sleuth, occult museum curator, and magic practitioner, and she’s been actively investigating the strange and the anomalous for well over 15 years. Founder of the world’s first all-female paranormal investigation team, Dana formally began her adventures into the world of the unexplained in the late 90’s, though she chalks her interest in the subject of the strange up to way too many episodes of The X-Files as a kid. With nearly two decades of research into everything from residual hauntings, to Bigfoot hotspots, to bizarre Fortean events, Dana is one of the paranormal field’s most seasoned veterans when it comes to investigating and documenting strange claims.

Eager to share her adventures with the world, in 2006, Matthews co-founded Week in Weird, which has grown to become one of the internet’s most popular destinations for true tales of the unexplained. When she’s not in the field chasing leads on the latest monster sighting, Dana acts as a caretaker of the Traveling Museum of the Paranormal and Occult — a carefully curated exhibit featuring some of the most haunted, cursed, and infamously anomalous objects that visitors can actually handle themselves.

Together, the paranormal power-couple have been featured on Animal Planet’s Finding Bigfoot, Travel Channel’s Mysteries at the Museum, and are featured on the latest episode of TLC’s Paranormal Lockdown, airing this Friday night (February 24, 9/8c)!

Blood, Blackouts, and a Blade: This Haunted Ritual Sword Possessed a Woman with the Urge to Kill

Black Hen Planchette: After a Haunted Ouija Board Burst Into Flames, This Family Called an Exorcist