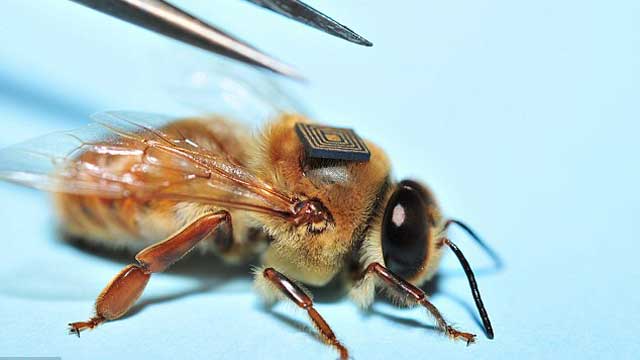 Bee colonies around the world have been collapsing – and technology could reveal why.

Australian researchers have revealed a tiny ‘backpack’ chip developed with Intel that could help shed new light on their plight.

It will allow insects to be monitored by a ‘smart hive’.

More than two out of five American honeybee colonies have died in the past year, and surprisingly the worst die-off was in the summer, according to a federal survey.

Since April 2014, beekeepers lost 42.1 percent of their colonies, the second highest loss rate in nine years, according to an annual survey conducted by a bee partnership that includes the U.S. Department of Agriculture.

‘What we’re seeing with this bee problem is just a loud signal that there’s some bad things happening with our agro-ecosystems,’ said study co-author Keith Delaplane at the University of Georgia.

‘The tiny technology allows researchers to analyse the effects of stress factors including disease, pesticides, air pollution, water contamination, diet and extreme weather on the movements of bees and their ability to pollinate,’ Professor Paulo de Souza of CSIRO said.

‘We’re also investigating what key factors, or combination of factors, lead to bee deaths on mass.’

‘The sensors, working in partnership with Intel technology, operate in a similar way to an aeroplane’s black box flight recorder in that they provide us with vital information about what stress factors impact bee health.’

As bees are normally predictable creatures, changes in their behaviour indicate stress factors or a change in their environment.

By modelling bee movement researchers can help identify the causes of stress in order to protect the important pollinating work honey bees do and identify any disease or other biosecurity risks.

‘Bee colonies are collapsing around the world and we don’t know why,’ said Professor de Souza.