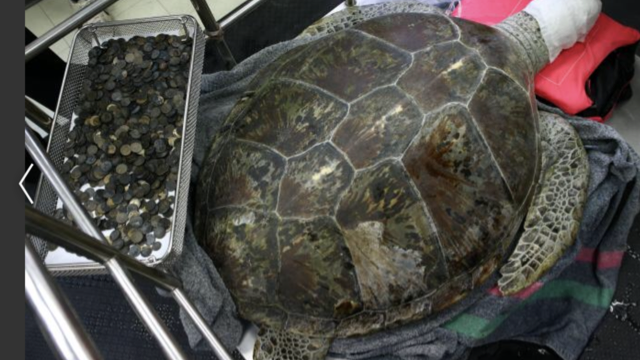 Thai veterinarians on Monday removed 915 coins from a 25-year-old sea turtle which had been swallowing items thrown into her pool for good luck, eventually limiting her ability to swim.

The coins and other objects removed from the turtle named Omsin – piggy bank in Thai – weighed 5 kg (11 lb). The turtle itself weighed 59 kg (130 lb).

The green sea turtle, living at a conservation center in Sriracha, Chonburi, east of the Thai capital of Bangkok, had been finding it hard to swim normally because of the weight.

The vets said they believed the seven-hour-long operation was the world’s first such surgery.

“We think it will take about a month to ensure she will fully recover,” said Nantarika Chansue, of Chulalongkorn University’s veterinary science faculty, adding that the turtle would need six more months of physical therapy.