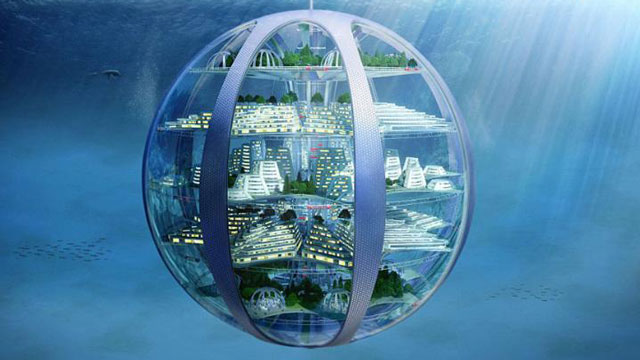 Entire cities suspended under water within a giant transparent bubble, as well as “super skyscrapers” that surpass the Shard and “Earth-scrapers” built up to 25 stories below ground level could be a reality within the next century, the SmartThings Future Living Report predicts.

The self-sustaining bubble, fully equipped with 3D printed houses as well as schools, offices and parks, would use the surrounding water to both supply itself with oxygen and generate hydrogen fuel.

Personal flying drones, which academics believe could become the standard method of transport, could also eliminate the need to pack for a holiday by transporting your entire home to your holiday destination. British space scientist  Dr Maggie Aderin-Pocock co-authored the report commissioned by Samsung’s SmartThings app, along a team of experts including the futurist architects and lecturers at the University of Westminster Arthur Mamou-Mani and Toby Burges and the urbanists Linda Aitken and Els Leclerq.

The 3D printed homes would be equipped with ‘smart’ LED surfaces that automatically adapt and reconfigure the interior layout of the home to suit the inhabitants’ changing moods. Advanced medical technology could also allow for health diagnosis pods to be installed in every home, which could supply medication or even a remote surgeon following a diagnosis, and make it more difficult for anyone to ‘pull a sickie’ from work due to the accuracy of the health pods.