Humans will make contact with aliens by the end of the century, theoretical physicist and futurist Michio Kaku told Redditers last week. However, Kaku said he wasn’t sure whether we’d be able to communicate directly with this unknown extraterrestrial society — one that could run the gamut from hostile to pacifist, according to Kaku.

In his AMA on Reddit, Kaku responded to a question about alien civilizations, saying, “Let me stick my neck out. I personally feel that within this century, we will make contact with an alien civilization, by listening in on their radio communications. But talking to them will be difficult, since they could be tens of light years away. So, in the meantime, we must decipher their language to understand their level of technology. Are they Type I, II, or III??? [These represent three categories in the Kardashev scale, measuring technological achievement in civilizations based on their level of energy use for communication.] And what are their intentions. Are they expansive and aggressive, or peaceful.”

Kaku added, “Another possibility is that they land on the White House lawn and announce their existence. But I think that is unlikely, since we would be like forest animals to them, i.e. not worth communicating with.”

Futurists and theoretical physicists, among others, have proposed a range of ideas for when and how Earthlings could “hear from” E.T., with one astronomer’s calculation predicting it would happen within 1,500 years and another suggesting we’ll find intelligent alien life by 2040.

Though a recent survey suggests humans would be cool with alien interlopers, many scientists and thinkers have warned about the risks involved. Famed physicist Stephen Hawking has voiced his concern several times, saying that intelligent aliens would have no problem wiping out the human race. That said, the same futurists and theoretical minds also fear that the same fate could be dished out to us by human-created artificial intelligence. 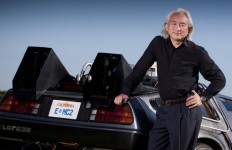