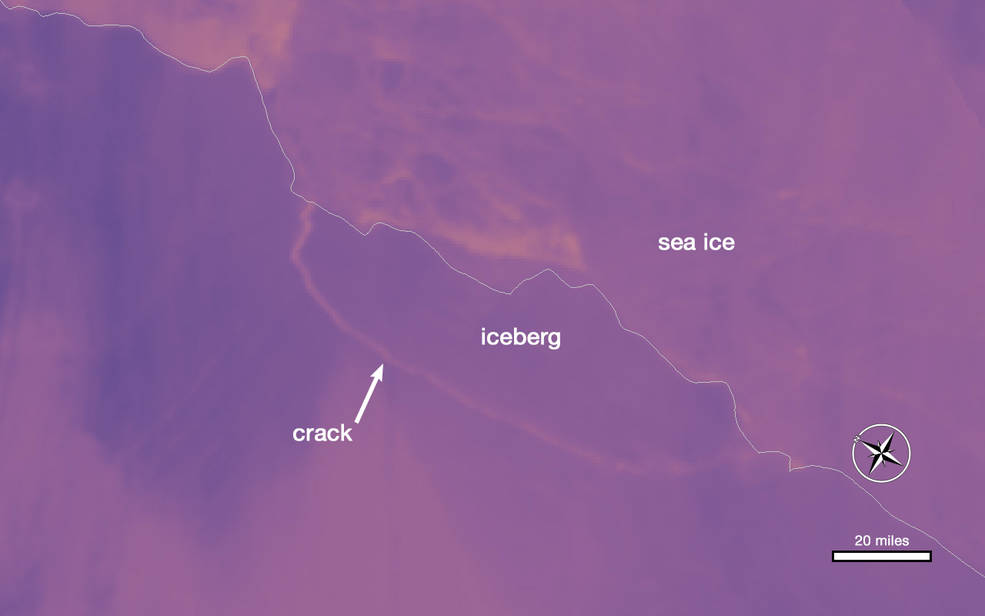 A one trillion tonne iceberg – one of the biggest ever recorded – has calved away from the Larsen C Ice Shelf in Antarctica. The calving occurred sometime between Monday 10th July and Wednesday 12th July 2017, when a 5,800 square km section of Larsen C finally broke away. The iceberg, which is likely to be named A68, weighs more than a trillion tonnes. Its volume is twice that of Lake Erie, one of the Great Lakes.

The final breakthrough was detected in data from NASA’s Aqua MODIS satellite instrument, which images in the thermal infrared at a resolution of 1km, and confirmed by NASA’s Suomi VIIRS instrument.

The development of the rift over the last year was monitored using data from the European Space Agency Sentinel-1 satellites – part of the European Copernicus Space Component. Sentinel-1 is a radar imaging system capable of acquiring images regardless of cloud cover, and throughout the current winter period of polar darkness.

The iceberg weighs more than a trillion tonnes (1,000,000,000,000 metric tonnes), but it was already floating before it calved away so has no immediate impact on sea level. The calving of this iceberg leaves the Larsen C Ice Shelf reduced in area by more than 12%, and the landscape of the Antarctic Peninsula changed forever.