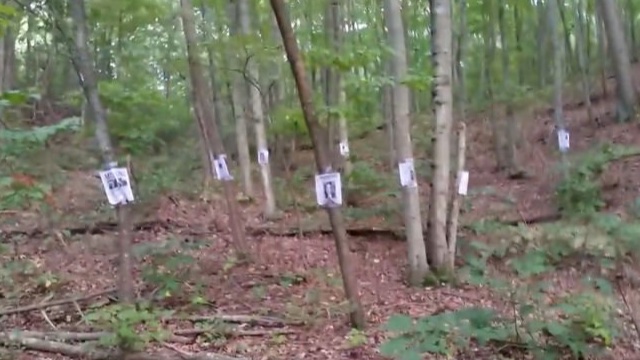 A man hiking through the woods in Huntington’s Berkeley Jackson County Park recently came across what he described as a creepy ‘shrine to missing persons’ made up of over a dozen missing persons flyers posted on trees, close to the remnants of a shelter.

James Rankin says that he was hiking through the woods in Long Island when he came across the disturbing display. Instead of freaking out, he took out his smartphone and recorded a video which he later posted on Facebook. The footage went viral very quickly, racking up over 230,000 views in less than 24 hours. In the video, Rankin shows all the different missing persons flyers, who appear to be of people from several U.S. states and keeps wondering who in their right mind would do something like this in the middle of the woods. He ends his creepy adventure by running for his life, saying he hears voices in the area.

People commenting on Facebook and Reddit quickly came up with various explanations for the creepy display of missing persons flyers. Some believed it was an elaborate promo for the new Blair Witch film, others claimed it was an old independent film set that no one had bothered to clean up, and some even suggested that it was dump site for a serial killer. The posters turned out to be of real missing people, some of which were still missing, while others had either been found dead or had returned home.

After making his escape from the forest, James ranking contacted the Suffolk County Police about his discovery, and they began his investigation. Two days later, the young explorer learned got a call back from the police who told him that the mystery had been solved and they were no longer investigating the case. Apparently, the disturbing scene had been meticulously set up by the owner of an adjacent property, for Halloween.