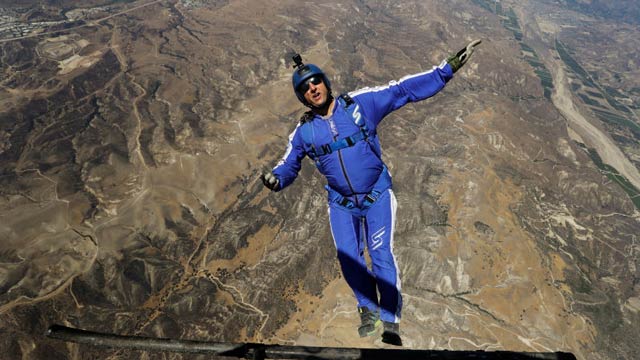 Skydiving is pretty terrifying on its own, even when you take into account necessary safety precautions. But what if you were to jump from an airplane without a parachute? If Luke Aikins’ stunt is any indication, you’d have to be highly skilled and train for two years before even attempting it. There’s also the issue of jumping from a plane without a parachute.

On Saturday, Aikins successfully fell 25,000 feet from a plane with nothing on him but a GPS, a camera, a communication device, and an oxygen mask, which was removed and handed to one of the three parachuted assistants at around 18,000 feet. Without a wingsuit or a parachute, he landed just a couple minutes later safely on a 10,000-square-foot net.

The fall itself is pretty amazing. It was broadcast on television (claiming to be live but on a one-hour delay), so you can watch it below in case you missed it.

“I’m almost levitating — it’s incredible, this thing that just happened,” he told reporters after climbing out of the net, according to E! Online. “The words I want to say, I can’t even get out of my mouth.”