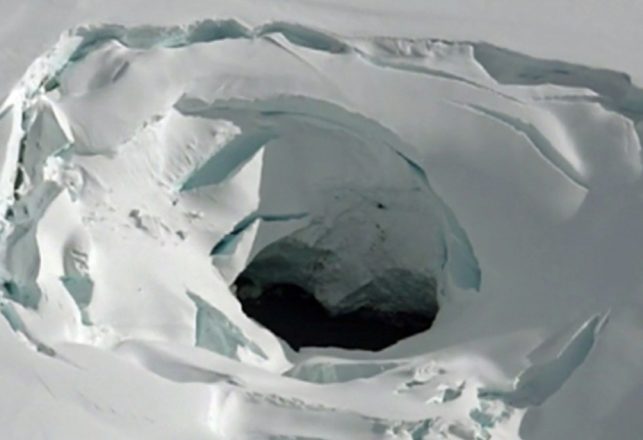 It’s bad news when giant holes open in the middle of neighborhoods, swallowing cars and occasionally people into abysses formed by erosion, abandoned mines or faulty construction. It’s worse news when giant holes open in Siberia, releasing methane gas that was kept in check until climate change changed the permafrost. Now there are reports that massive holes are suddenly appearing in the world’s largest glacier. Another sign of the apocalypse? Are we running out of places to move (or hide)?

“There was 100 meters of thick glacier before Now we see it down in a rock that has not been seen before.”

Magnús Tumi Gudmundsson, Professor of Geophysics at the University of Iceland, broke this bad news to his country in an interview (Google translation in English) with RUV, Iceland’s national public-service broadcasting organization. He has photographed holes that were up to 400 meters (1300 feet) wide in Vatnajökull, the glacier that covers over 8 percent of Iceland and is considered to be the world’s largest in volume and second-largest in mass. Are those records now in jeopardy?

“If geothermal growth grows considerably, water could accumulate in the box, and there may be a risk of jökulhlaup. But we do not know that it’s going to happen yet. “