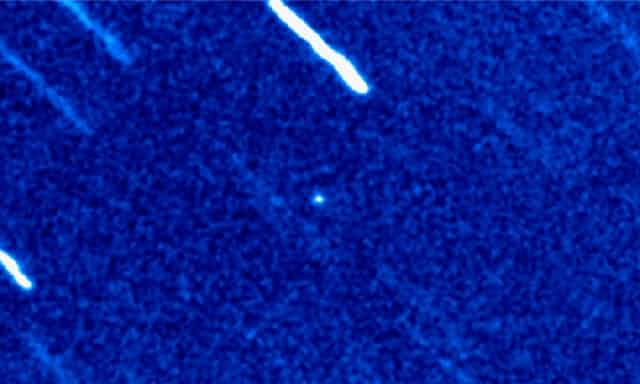 If its origins are confirmed, the asteroid or comet, named A/2017 U1, will be the first object known to come from elsewhere in the galaxy, say astronomers

A false-colour image of the object, which appears as a faint point of light in the centre. The streaks are stars, caused by the telescope tracking the object.

A mysterious object detected hurtling past our sun could be the first space rock traced back to a different solar system, according to astronomers tracking the body.

While other objects have previously been mooted as having interstellar origins, experts say the latest find, an object estimated to be less than 400m in diameter, is the best contender yet.

“The exciting thing about this is that this may be essentially a visitor from another star system,” said Dr Edward Bloomer, astronomer at the Royal Observatory Greenwich.

If its origins are confirmed as lying beyond our solar system, it will be the first space rock known to come from elsewhere in the galaxy.

Published in the minor planet electronic circulars by the Minor Planet Center at the Harvard-Smithsonian Center for Astrophysics, the observations reveal that the object is in a strong hyperbolic orbit – in other words, it is going fast enough to escape the gravitational pull of the sun.

Objects originating from, and on long-period orbits within, our solar system can end up on a hyperbolic trajectory, and be ejected into interstellar space – for example if they swing close by a giant planet, since the planet’s gravity can cause objects to accelerate. But Dr Gareth Williams, associate director of the Minor Planet Center, said that wasn’t the case for the newly discovered body.