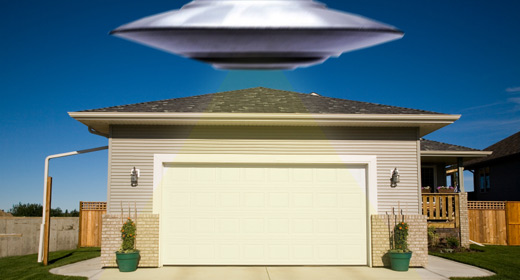 A neighborhood in Arvada, Colorado have a mystery on their hands: 40 of their electric garage doors have been overpowered by a strange signal.

One resident told 9News that the problem began two days ago, and until talking to some of her neighbors, hadn’t realized how many people had been affected. In fact, the problem encompasses a half mile radius, leading experts to believe that whatever the source of the mysteriously powerful signal, it’s big.

Colin Cooper, one of the affected residents, has his own theory.

Paul DesChenes, a communications engineer, believes that the strange outage could be related to some shadowy government testing, or even local mad scientist.

“First, the frequencies used for garage doors is unlicensed. It’s possible that a project from Space command may have caused the problem, or a tinkerer in a home lab made some kind of device… what if is something more sinister? Unlicensed items like these and other gadgets in “white space” frequencies an be affected. There’s no recourse. They do not require a license, only need to be FCC type approved.”

Whatever the case, at least until the garage door company arrives to take a look tomorrow, the residents of Torrey Court are living with a suburban nightmare: manual control.