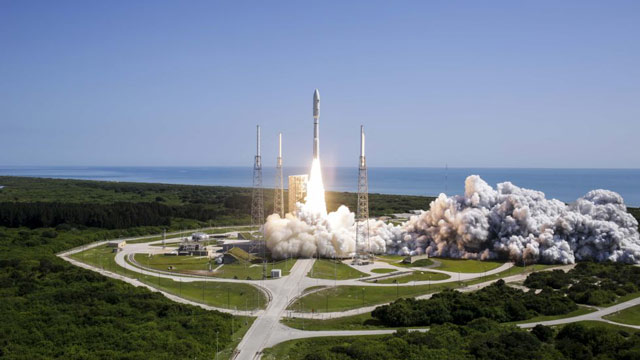 The Atlas V rocket is not the world’s most powerful rocket, but it can credibly claim to be the most reliable. Before Friday morning, it had flown 62 times into space, completing its primary mission each time. That 100 percent mission success rate is unparalleled in the history of orbital rockets over so many flights. Accordingly, it’s a source of pride for its manufacturer, United Launch Alliance.

The 63rd flight on Friday was also a success, delivering the MUOS-5 satellite into a geostationary transfer orbit 31,000km above Earth for the US Navy. This is the final satellite in the five-satellite constellation, which provides war fighters with significantly improved communications.
The launch was also notable because it flew the 551 variant of the rocket. This combines the core stage along with five solid rocket boosters, which burn for 88.3 seconds at the beginning of the flight to give the rocket an initial kick off the launch pad. This most powerful variant of the Atlas V rocket can deliver up to 19 tons of payload to low-Earth orbit and 8.9 tons to geostationary transfer orbit. The 551 configuration first flew back in 2006, when it launched the New Horizons mission to Pluto.

But the Atlas V rocket’s reliability has come with a price. United Launch Alliance buys the vehicle’s liquid oxygen/liquid kerosene main engine, the RD-180, from Russia. And this engine has carried an increasingly high political price amidst rising tensions with Russia, as some members of Congress have balked at launching US national security payloads on vehicles with Russian engines. United Launch Alliance has a deadline of 2022 to end its reliance on the Russian engine.