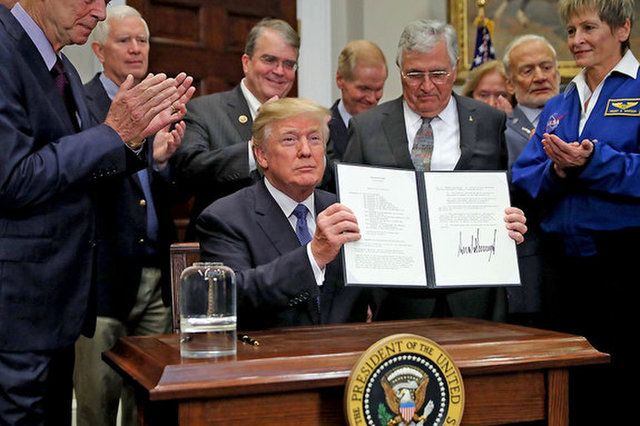 President Trump signed the order during a ceremony in the Oval Office, surrounded by members of the recently re-established National Space Council, or NSC (which provides recommendations to the president on space policy), as well as active NASA astronauts Christina Hammock Koch and Peggy Whitson, Apollo 11 astronaut Buzz Aldrin, and retired astronaut Jack Schmitt, who flew to the moon on the Apollo 17 mission.

“Exactly 45 years ago, almost to the minute, Jack [Schmitt] become one of the last Americans to land on the moon,” Trump said. “Today, we pledge that he will not be the last.”

“The directive I’m signing today will refocus America’s space program on human exploration and discovery,” Trump said during the ceremony. “It marks an important step in returning American astronauts to the moon for the first time since 1972, for long-term exploration and use. This time we will not only plant our flag and leave our footprint — we will establish a foundation for an eventual mission to Mars and perhaps someday to many worlds beyond.”