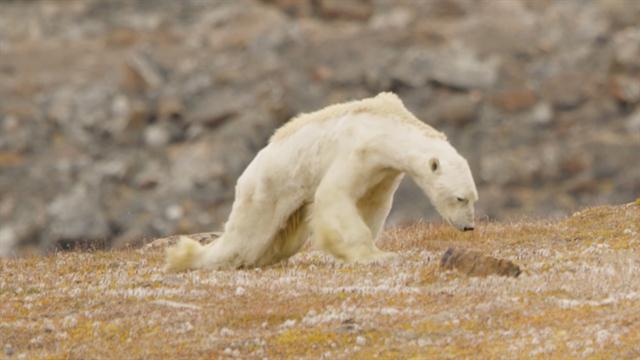 The video of a starving polar bear (above) has been seen by millions of people online over the past few days. For some, it’s a symbol of what many polar bears may face in a warming climate. For others, it’s a red herring.

So what can one gut-punch of a video really tell us? Quite a lot.

Why couldn’t the film crew help the bear?

Watching the emaciated polar bear struggle to move and desperately dig for food in a trash can is hard to watch on video. For Paul Nicklen and Cristina Mittermeier, two biologists turned photographers turned co-founders of conservation group Sea Legacy, it was even harder to witness in person.

“Some have criticized us for not doing more to help the bear, but we were too far from any village to ask for help,” Mittermeier wrote in a follow-up piece about the video,” and approaching a starving predator, especially when we didn’t have a weapon, would have been madness.”

“In the end, I did the only thing I could: I used my camera to make sure we would be able to share this tragedy with the world.”

What do we know about this polar bear from the video?

This polar bear is starving. The bear’s thin frame and protruding bones are clear indicators of this, and its atrophied muscles suggest it’s been starving for an extended period of time.

Without a full necropsy, it’s nearly impossible to say whether or not the bear had some kind of disease. Some polar bears have been known to contract parasites, but like other bear species, polar bears are not that prone to diseases.

Nicklen noted that the bear showed no other signs of injury and had no visible scars. When polar bears engage with one another, the encounters can be brutal. It’s rare to see a bear advanced in age with few visible scars.

“That bear is clearly severely malnourished,” said Steven Amstrup, the chief scientist for Polar Bears International, in an interview Monday. “It clearly has the symptoms of starvation.”