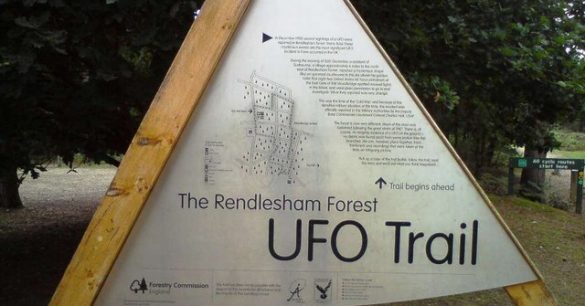 As a (kind of) follow-up to my article on the controversy surrounding Marilyn Monroe, UFOs, and a questionable document, there is the matter of an equally controversial document that concerns the famous December 1980 UFO event at Rendlesham Forest, Suffolk, England. The most widely accepted scenario within the UFO research community is that extraterrestrials landed/manifested in those dark woods in late December. There is talk of a small, intelligently controlled vehicle moving through the trees, of lights beaming down to a weapons-storage area in the vicinity, of bizarre activity in the woods, and of strange, dwarfish entities seen at close quarters.

There is, however, absolutely no doubt at all that this particular document is completely and utterly bogus. I mention it, though, in the event that it might catch your attention and provoke a “WTF?!” response. The document is actually a letter, written on British Ministry of Defense paperwork and is undated. It reads (without interruption) as follows:

QUOTE: “Dear [Deleted], As you know, OSI has completed a report on the landing of a craft of unknown origin crewed by several entities near RAF Bentwaters on the night of December 29/30 1980. Interestingly, OSI reports that the entities were approximately 1 1/2 metres tall, wore what appeared to be nylon-coated pressure suits, but no helmets. Conditions on the night were misty, giving the appearance that the entities were hovering above ground level.