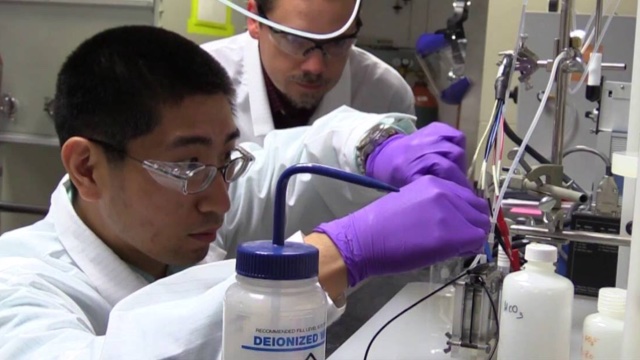 OAK RIDGE, Tenn., Oct. 12, 2016—In a new twist to waste-to-fuel technology, scientists at the Department of Energy’s Oak Ridge National Laboratory have developed an electrochemical process that uses tiny spikes of carbon and copper to turn carbon dioxide, a greenhouse gas, into ethanol. Their finding, which involves nanofabrication and catalysis science, was serendipitous.

“We discovered somewhat by accident that this material worked,” said ORNL’s Adam Rondinone, lead author of the team’s study published in ChemistrySelect. “We were trying to study the first step of a proposed reaction when we realized that the catalyst was doing the entire reaction on its own.”

The team used a catalyst made of carbon, copper and nitrogen and applied voltage to trigger a complicated chemical reaction that essentially reverses the combustion process. With the help of the nanotechnology-based catalyst which contains multiple reaction sites, the solution of carbon dioxide dissolved in water turned into ethanol with a yield of 63 percent. Typically, this type of electrochemical reaction results in a mix of several different products in small amounts.

“We’re taking carbon dioxide, a waste product of combustion, and we’re pushing that combustion reaction backwards with very high selectivity to a useful fuel,” Rondinone said. “Ethanol was a surprise — it’s extremely difficult to go straight from carbon dioxide to ethanol with a single catalyst.”

The catalyst’s novelty lies in its nanoscale structure, consisting of copper nanoparticles embedded in carbon spikes. This nano-texturing approach avoids the use of expensive or rare metals such as platinum that limit the economic viability of many catalysts.