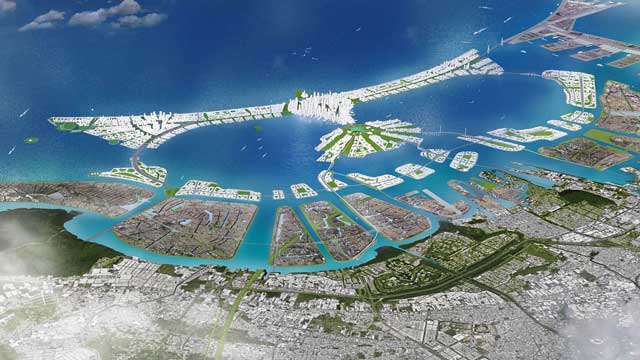 More than 10 million people currently live in the fast-growing Indonesian capital of Jakarta. There’s a potential snag in the city’s future expansion, though: it’s slowly sinking into the ocean.

Jakarta sinks an average of three inches a year, and parts of the coast are going down as much as 11 inches a year, according to geodynamic experts. Around 40% of the city is already below sea level.

In an attempt to halt the damage, authorities are building a gigantic wall off the coast, measuring 25 miles (40 kilometers) long and 80 feet (24 meters) high, National Geographic reports. To fund the $40 billion and 30-year-long project, the city will also create 17 artificial islands, on which developers can build luxury homes, offices, and shopping malls. Though it’s expensive, the seawall is expected to ultimately be cheaper than the cost of flooding.

Here’s a sketch of the planned seawall, from KuiperCompagnons, a Dutch firm helping to design the plan.

If it gets the green light, aerial views of the completed wall and islands together will reveal the shape of a Garuda: a legendary, bird-like creature considered a national emblem of Indonesia.