The craters – two in Yamal and one on the Taymyr peninsula – were revealed during the summer, leading to urgent analysis by scientists as well as a wave of speculation suggesting the cause was aliens from outer space, meteorites, or stray missiles.

Now respected Science in Siberia journal has come up with a coherent explanation for the northern craters and – sensationally – links it to the notorious Bermuda Triangle phenomenon, where ships and aircraft have disappeared under strange circumstances between Bermuda, Florida and Puerto Rico.

Heating from above the surface due to unusually warm climatic conditions, and from below, due to geological fault lines, led to a huge release of gas hydrates,  say the scientists from the Trofimuk Institute of Petroleum-Gas Geology and Geophysics in Novosibirsk.

They subjected one of the two known craters in Yamal – a peninsula known to locals as ‘the end of the world’ – to detailed scrutiny.

‘The main element – and this is our working theory to explain the Yamal crater – was a release of gas hydrates. It turned out that there are gas hydrates both in the deep layer which on peninsula is several hundred meters down, and on the layer close to the surface,’ said scientist Vladimir Potapov.

Gas – notably methane – is trapped in the frozen hydrates under the permafrost and beneath some oceans.

‘There might be another factor, or factors, that could have provoked the air clap. Each of the factors added up and gas exploded, leading to appearance of the crater. ‘The crater is located on the intersection of two tectonic faults. Yamal peninsula is seismically quiet, yet the area of the crater we looked into has quite an active tectonic life’, Potapov said.

Crucially, the surface ice and upper layers of permafrost were exposed to ‘a much warmer summer than usual’, as Tyumen scientist Marina Leibman earlier noted. Igor Yeltsov, the Trofimuk Institute’s deputy head, stressed: ‘There is a theory that the Bermuda Triangle is caused by gas hydrates.’

He explained: ‘They start to actively decompose with methane ice turning into gas. It happens in an avalanche-like way, like a nuclear reaction, producing huge amounts of gas. That makes the ocean heat up, and ships sink in waters which are infused with huge amounts of gas. This leads to the air becoming supersaturated with methane, creating an extremely turbulent atmosphere, leading to aircraft crashes’. 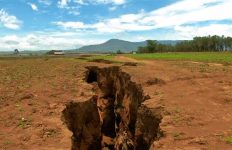 Why This Giant Crack Opened Up In Kenya’s Rift Valley→ 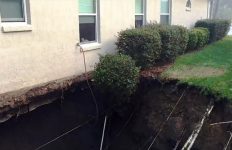 Why Does Florida Keep Getting Sinkholes?→ 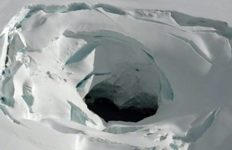 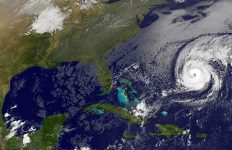