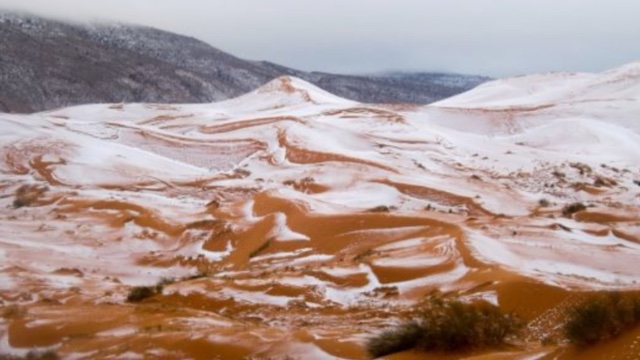 “That will happen when pigs fly” is an adynaton – a figure of speech used to describe something that’s impossible and will never happen. “When hell freezes over” is another good example. “When the Cubs win the World Series again” used to be an adynaton until this year. “When it snows in the Sahara” was another popular one that just moved over to the “no longer applicable” column when it snowed in that desert for only the second in the memories of those who keep track of such things. Perhaps we need a new term for failed adynatons … badynatons?

The Algerian town of Ain Sefra is known as the “Gateway to the Desert” (one of a number of cities that use this name to attract tourists – Zagora and Guelmim in Morocco are two others) for its close proximity to the Sahara – the largest hot desert in the world. How hot is hot? The average high temperature is 40 °C (104.0 °F) during the hottest month, the record hottest temperature ever was set on September 13, 1922, when it hit 58 °C (136 °F) in El Azizia, and the daytime temperature of the sand can reach 80 °C (176 °F). And yet …

Although the air is dry and evaporative to an extreme, in the winter strong polar fronts from the Mediterranean can occasionally produce rain, and, in this case, snow. It is not unusual for temperatures to dip below freezing in the winter.
Weather.com’s Kait Parker confirmed what photographer Karim Bouchetata took beautiful pictures of … snow on the ground in the Sahara on December 19th, 2016.