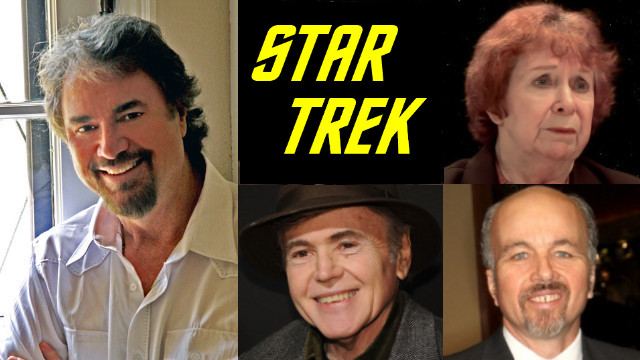 Tonight we continue our journey into one of pop culture’s most beloved creations, Gene Roddenberry’s Star Trek.  A show that ended before its original 5 year mission and has carried on for over 50 years building an impressive global fan base that has inspired inventors, engineers, astronauts and radio show hosts! We are joined tonight by Mr. Chekov, Walter Koenig, and a host of guest stars, writers, producers and fans.

Marc Cushman is an author and Los Angeles-based screenwriter and director. His television writing assignments include scripts for Star Trek: The Next Generation, Beyond Belief: Fact or Fiction, and Diagnosis: Murder. His feature film credits include Desperately Seeking Paul McCartney, The Magic of Christmas, and In The Eyes Of A Killer. As a writer/producer, Marc created and served as show runner for two TV series: the cult comedy Channel K and its spin-off, the original Bachelor Pad. Marc is the author of the “biography of a TV show,” I Spy: A History Of The Groundbreaking Television Series, and the definitive examination of the making of the original Star Trek series, with his 2,100 page, three-volume set, These Are The Voyages, TOS.

D.C. (Dorothy C. Fontana) is a television writer best known for the original Star Trek. She started out as Gene Roddenberry’s secretary, then went on to write many episodes under her own name as well as others. After Star Trek she produced Star Trek: The Animated Series as well as writing scripts for Star Trek: The Next Generation and other science fiction shows such as The Six Million Dollar Man and Babylon 5.

Walter Koenig is actor, director, screenwriter, novelist, acting professor, and comic book creator, he played Ensign Pavel Chekov in the orignal Star Trek begining with Season 2. Recently he was nominated for Best Actor for the short film called “Who is Martin Danzig?”

Clint Howard was 7-years-old when he guest starred in the first episode filmed for the original series (after the pilot films), playing an adult alien named Balok. Clint is delightful – very animated and funny. He’s also the brother of Ron Howard and starred in a couple series of his own in the 1960s, including Gentle Ben.