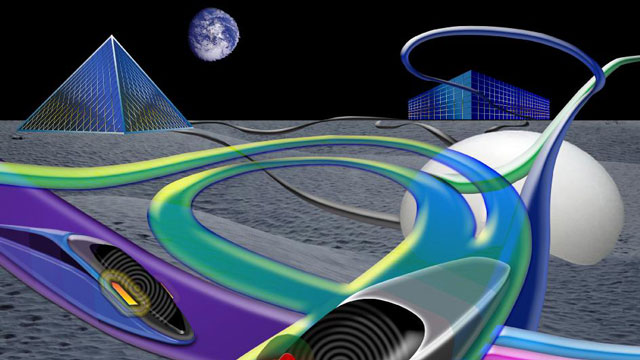 UC Santa Barbara’s Joseph Polchinski brought to bear his own expertise when he delivered the 2014 Faculty Research Lecture in the university’s Corwin Pavilion Thursday evening. Speaking to a full house, Polchinski, a professor of physics and a permanent member of the campus’s Kavli Institute for Theoretical Physics, gave a talk titled “Space-Time versus the Quantum.”

Polchinski guided the audience through the evolution of the current conundrum. That history is full of paradoxes, each leading to new and more interesting discoveries. He described how each step in the unification process led to unexpected findings.

For example, exploring quantum mechanics and special relativity, which deals with things moving near or at the speed of light, British theoretical physicist Paul Dirac improved an existing equation. In so doing, he identified twice as many solutions as expected. Polchinski explained that the extra solutions represented antiparticles and antimatter, which were actually discovered two years later.

Even though special relativity and quantum mechanics fit together without conflict, general relativity and quantum mechanics are much harder to reconcile, in part, Polchinski pointed out, because something that is both very massive and very small is difficult to find. “We have to go to extreme environments to find situations where both are important,” he said. “One such environment is the early moments of the Big Bang; another is the event horizon of a black hole.”

According to Hawking, in order to resolve the paradox, the rules of quantum mechanics have to be modified. “A new place where things don’t fit in the way we thought they did has led us to a lot of new ideas,” Polchinski said.

More via The UCSB Current.