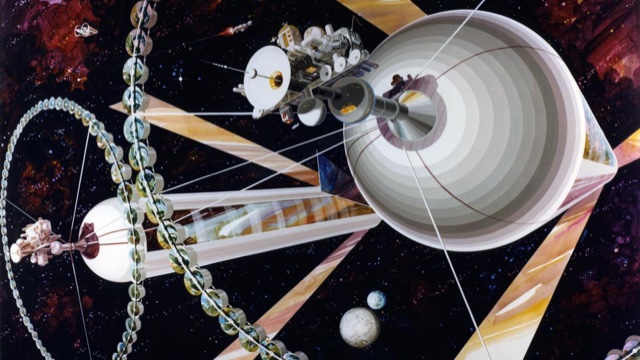 Thousands of people could be living in floating space colonies orbiting the Earth in 20 years’ time, according to the head of a project by the British Interplanetary Society (BIS).

And, while life in space might sound unappealing to some, Jerry Stone believe it could actually be healthier than planet Earth, enabling people to live longer and, eventually, grow taller.

Mr Stone, author of the book One Small Step about the moon landings, and other members of the BIS have been updating research carried out in the US in the 1970s into how humans could start living in space in large numbers.

In a speech in Aberdeen as part of British Science Week, Mr Stone will claim humanity is now close to the point where such colonies could be built using material taken from the Moon and asteroids.

Speaking to The Independent, he said the space colonists would initially build and maintain solar panels that would be used to provide power on Earth.

This, he said, was much more efficient than collecting the sun’s energy on the Earth’s surface after it has passed through the atmosphere.

But other industries might later move into space to take advantage of the weightlessness and huge supply of energy from the sun.

The colonies would consist of a vast hollow cylinder, which would rotate to provide gravity for the people who would live on the inside.

Mr Stone said much would depend on private companies developing spacecraft that provided cheap and reliable access to space.

But asked when he thought the first major colony might be created, he said: “If we were to say start in 10 years’ time, we could potentially have this up and finished in 20 years from now, which is pretty amazing, isn’t it?”

The research in the 1970s was led by Princeton University physicist Professor Gerard O’Neill, who asked his students to come up with designs for space colonies.

They decided it would be better for them to float in space, rather than be attached to the Moon, for example.

They came up with a number of designed, calling them Island One, Two and Three.

While the project might sound far-fetched, Mr Stone said it could actually have been done 40 years ago.