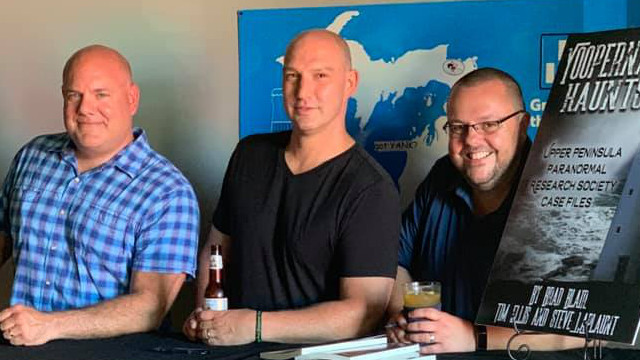 Eerie. Exotic. Haunted. Michigan’s Upper Peninsula boasts a wild and mysterious landscape that teems with ghosts from its rugged and colorful history. In earlier times this remote and often inaccessible terrain spawned a world of its own that still lives on in the haunted mists and shadows.

Tonight we are joined by Michigan’s premier investigators, the Upper Peninsula Paranormal Research Society, as they open their case files to some of the best haunted locales. Most of the team are U.P. natives, fondly known as “Yoopers.” Their stories are packed with history, lore, and detailed descriptions of investigations, plus ample helpings of charm and humor.

Born and raised in Sault Ste. Marie. Tim, Steve and Brad met in third grade and their love of everything weird and creepy bonded them together immediately. Tim graduated Sault Area High School in 1991, and attended Central Michigan University where he majored in Broadcasting and Cinematic Arts. After receiving his Bachelors Degree from CMU, Tim returned home and quickly began working in radio where he has been a local DJ since 1996. It was that time when the three childhood friends reunited back in Sault Ste. Marie and their love for everything strange picked right back up and by 1999, the Three had started The Upper Peninsula Paranormal Research Society. In 2008, Tim and Brad Co-Founded the Michigan Paranormal Convention, which is celebrating its 10th year. In 2016 Tim and Brad created the Pod-Cast, Creaking Door Paranormal which is still going strong today. In 2019, Tim, Steve and Brad, with the blessing of the rest of the team, sat down to being the writing of the first book based on the teams case files.

Brad Blair is an author, veteran paranormal researcher, co-founder of the Upper Peninsula Paranormal Research Society, co-host of Creaking Door Paranormal Radio, and co-founder & co-owner of the Michigan Paranormal Convention. He has investigated claims of hauntings across the U.S. and abroad, including England, Cuba, & Romania, and has contributed to numerous books and documentaries on the paranormal.

Steve LaPlaunt was born and raised in Sault, MI and is a co-founder of UPPRS and has been investigating paranormal for almost 20 years. He has worked in Health care for 20+ years in Rehab/Physical therapy setting and has two Bachelor of Science degrees one in Athletic training and the other in Exercise Science.