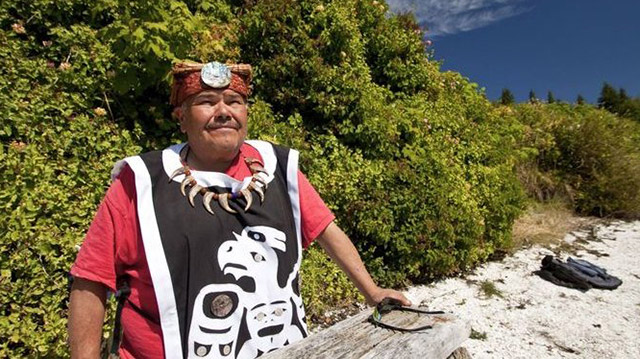 Thomas Sewid is a member of the Kwakwaka’wakw (Kwakiutl) Tribe from northeastern Vancouver Island British Columbia. He is also half Cree Native from central Canada. A commercial fisherman all his life, he has journeyed the entire coast comparing information about Sasquatch with others who believe. 28 years ago, he was sent out into his traditional territories located between Vancouver Island and the mainland known as The Broughton Archipelago to be a watchman of his Peoples’ abandoned Indian Village. This began his life to live in the bush year round, being a grizzly bear hunting guide, fishing guide and Eco-tourism operator. He would also volunteer to be the lone watchman for logging camps during the winter shutdown deep in isolated inlets throughout the coast. He would have encounters with the creatures and it stirred up his interest to learn more about them.

He lives part-time in Kent Washington with his partner Peggy and they conduct Sasquatch/Bigfoot tours and expeditions with Ha Moo Moo Adventures. She does the Tzoonakwa and Bokwus dance for their operations. Having studied under Dr. John Bindernagel and learning about researching the creatures, he’s incorporated his ancestral native teachings and ways to share a greater understanding about the migratory patterns of the Pacific Northwest Sasquatch/Bigfoot. Thomas operates the Facebook group Sasquatch Island to share the native perspectives to the creatures with all. He’s also in production of a television series call Aboriginal Sasquatch Stories. Many heard him when he did 5 episodes with Sasquatch Chronicles and other podcasts, Internet Radio shows and years of doing television shows about the creatures. One can most times find Thomas out in the bush conducting research or tours.