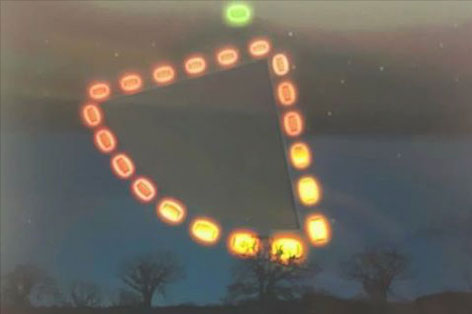 December 28, 2017 Pentyrch and Llantrisant, Wales, U. K. – The village of Pentyrch with 3,000 residents in South Wales near Cardiff has been inhabited for over three thousand years since the Neolithic and Bronze Ages. The region has long had UFO reports. Back in the 12th Century year of 1113, religious pilgrims in southwest England reported seeing a glowing fire-belching “dragon” emerge from the sea, fly into the air, and disappear into the sky. By the 20th Century, there were increasing reports of silver discs flying or coming out of the water around St. Bride’s Bay in far western Wales. Some eyewitnesses even described encountering strange beings not considered human and linked to the UFOs. Then investigators began calling southwestern U. K. the “Welsh UFO Triangle.”

A year ago in February 2016, Welsh residents living northwest of Cardiff in the Pentyrch region were puzzled by a grey-colored, twin-propeller-driven airplane that began flying in figure eights over their houses at mid-day on February 24, 2016. Periodically the plane would fly out and do a big circle and then return to repeat the figure eight pattern over and over.

According to 53-year-old Caz Clarke, for the past twenty-five years she has lived in western Pentyrch and for the past twelve years only two to three miles from Llantrisant, the site of The Royal Mint. She knows the region well, but she and her next-door neighbor, “Dave” — who wants to remain anonymous — have never seen a twin-propeller plane do figure eights and large circles over their houses before. And it didn’t end on February 24th. The figure-8 plane persisted for three days. Dave called the Ministry of Defense and also emailed the MoD to ask why the plane kept flying in patterns over their Pentyrch homes. However, no official admitted they even had an airplane over Pentyrch.

Frustrated that they could not get any answers from authorities about why the plane was there, Caz and Dave decided on the early morning of February 26, 2016, to go into Caz’s garden to watch the persistent plane that had been flying for hours from daylight into night. Then at 2 AM, a huge AWACs plane and helicopters showed up and what unfolded after that seems to fall into the category of some kind of military attack on a UFO.

All of this caught the attention of the Swansea UFO Network (SUFON) based further west of Llantrisant and Pentyrch. SUFON has been investigating what happened that night and one of their members, Gari Jones, sent me emails about the dramatic events that SUFON has reported at its website (see at end of this report), but have not been reported much by local media to the general public. I wanted to learn more and recently he and Caz Clarke joined me in a recorded phone interview.