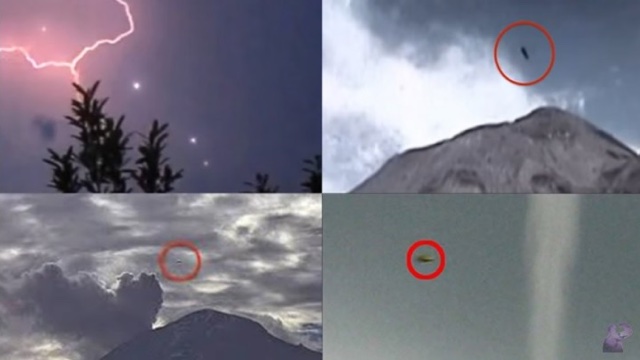 While most people are not probably aware of this, but apparently reports of alleged UFO sightings tend to increase by manifold in the period leading up to a massive earthquake or during a volcanic eruption — or at least, that is what some conspiracy theorists would have one believe.

According to them, it is them aliens, again! While such seemingly crackpot theories are not usually unheard of — courtesy the hundreds of conspiracy theory bulletin boards across the Internet — this new one seems to have come after a UFO was allegedly seen near the erupting Colima volcano in Mexico last month.

Scott C. Waring, who runs UFO Sightings Daily, quickly reacted, saying, “The UFO is long, and cigar-shaped much like many of the past UFOs seen around Mexican volcanoes on live cams.

“The UFO could not leave from the mouth since there was an eruption, so they took a side path.”

However, such theories are almost always dismissed by the scientific community citing more scientific and plausible explanations. For example, in Canada, Michael Persinger and Gyslaine Lafrenière conducted a study on the correlation between UFO sightings and seismic-related locations. Their critically acclaimed book Space-Time Transients and Unusual Events claim that there are ample evidence for one to conclude that the tectonic strains in the Earth’s crust (strains that happen during or before earthquakes and volcano eruptions) generate large amounts of energy that produces columns of electrical energy and glowing balls of light in the atmosphere, reports The Express.