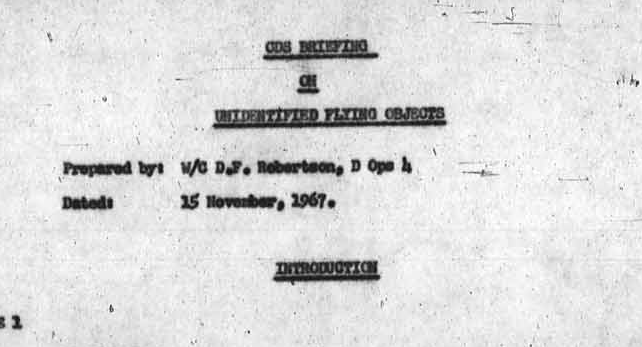 In going through the UFO files within the Canadian National Archives, I came across a curious briefing document that had been prepared in November 1967 to give an overview of the status of the UFO phenomenon in Canada. It had been created, with accompanying slides, by Wing Commander D.F. (Douglas Furg) Robertson of the Canadian Forces, possibly to bring the new Minister of Defence up to date (the infamous Paul Hellyer had left the position a few months earlier). But the Briefing was more designed to help alleviate the burden of dealing with UFOs by the Canadian Department of National Defence (DND).

On the first page, Roberson defines a UFO as “an unusual aerial sighting which the observer is unable to identify or explain.” This definition is at odds with more refined versions that place some responsibility on the investigator rather than the observer. But if someone sees something he or she can’t explain, it’s a UFO, at least to the Canadian Forces.