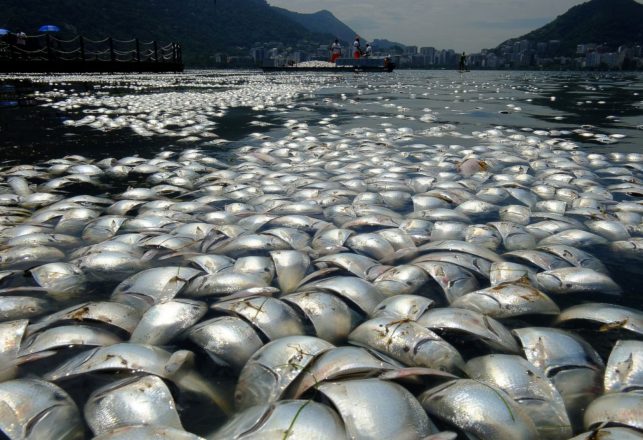 Parkgoers in central China were terrified by a recent unexplained mass fish suicide which looked like something straight out of a Hitchcock film. On June 13th, hundreds of fish began jumping and flailing wildly, leaping straight out of the water in a desperate attempt to escape…well, something. The event happened at Boai Park in Jiaozuo, Henan Province at about 4:30 in the afternoon. All of the fish appeared to be silver carp, which are common throughout China. The incident was caught on camera by an amazed local resident who submitted the video to the China Youth Daily newspaper.

There is anecdotal evidence of fish jumping out of bodies of water en masse in a panic like this shortly before earthquakes, and the mysterious oarfish is known to wash ashore dead just before significant seismic activity. No earthquake has occurred in Henan Province yet, however, causing officials and residents alike to search for alternative explanations.

Some Chinese netizens believe an electrical current in the water could have been shocking the fish, while others chalked it up to the usual: Chinese industrial pollution. Local officials, however, countered those speculations by assuring the public that the electrical conduit in the lake is working just fine and that the waters are free of contaminants. Officials instead claimed that a local singing competition taking place nearby spooked the fish into a panic. I’ve heard some bad singing in my day, but I’m not sure I buy that explanation. Chinese local government officials are known to hand out spurious explanations and solutions for disasters both man-made and natural in an effort to “maintain social harmony,” so we’ll likely never know what caused the fish to behave in such a bizarre way.