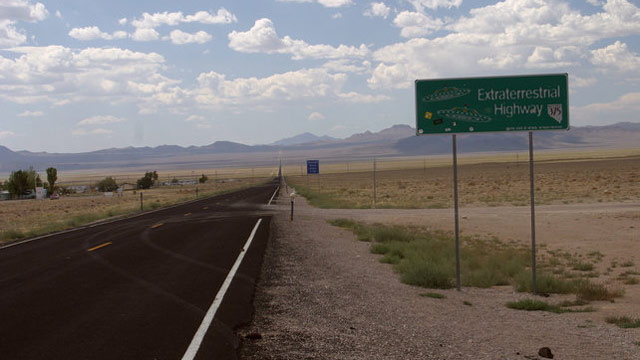 There is an interesting convergence going on these days, whereby aliens are back as the focus of attention.

Stephen Hawking’s new series, Genius, airing on PBS, just had an episode titled Are We Alone? Presidential candidate Hillary Clinton recently revealed that she would be ready to release secret documents concerning the infamous Area 51, where, according to conspiracy theorists, remains of an alien corpse (possibly also of a downed spaceship, they say) is kept. She was quick to add that she would only make public those documents that do not compromise national security. Last but not least, Contact in the Desert, the huge alien fest taking place at Joshua Tree National Park, a gathering with dozens of talks, workshops and courses on aliens, is scheduled for June 3-6. Among the experts, expect to see Chariots of the Gods author Erich von Daniken, who still claims that aliens were here long ago and were instrumental in helping ancient civilizations in their massive building projects. Unfortunately, a quick scan of the speakers didn’t reveal any practicing planetary scientist or astronomer of note.

As New York Times science writer George Johnson recently remarked, trying to make sense of the huge popularity of conspiracy theories involving aliens and other secrets: “The truth is out there or in there. Open the gates to the inner sanctum — whether it’s the Vatican, the Federal Reserve, the Masonic lodges or Area 51 — and suddenly everything will make sense.”